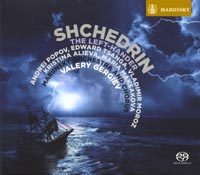 Description: Shchedrin's opera, to the composer's libretto after the novella by Nikolai Leskov (who wrote the novel on which Shostakovich's Lady Macbeth is based), is an entertaining satirical fantasy. The plot concerns a marvellous life-sized mechanical flea presented to the Tsar by the English court, and its re-engineering by an illiterate, left-handed Russian gunsmith in an attempt at one-upmanship. This provides rich soil for the cultivation of all manner of ironic social comemntary, and by extension, no shortage of inventive musical humor. Everybody gets sent up here; the formal, up-tight English, the competitive but slipshod Russians, the underappreciated idiot-savant protagonist; but there are also moments of genuine drama and pathos. The score is constantly in flux, though remaining in a very tonal idiom with natural and grateful vocal lines, encompassing very recognisable derivatives of the Russian operatic tradition, overbearing and pompous music for the English court, a clever tinkling of tiny anvils for the forging of the flea, portentous faux-dramatic climaxes for episodes of international intrigue, a nostalgic interlude depicting a Russian idyll, genuinely affecting, a tragic drinking song during a storm at sea, and finally a descent into an unexpectedly moving conclusion, the demise of the left-hander due to the neglect of a Kafka-esque bureaucracy. 2 CDs. Russian (Cyrillic)-English libretto. Andrei Popov (tenor), Edward Tsanga (bass-baritone), Kristina Alieva (soprano), Maria Maksakova (mezzo), Mariinsky Orchestra and Chorus; Valery Gergiev.