BRIGHT SHENG (b.1955): The Song and Dance of Tears, Colors of Crimson for Marimba and Orchestra, The Blazing Mirage for Cello and Strings. 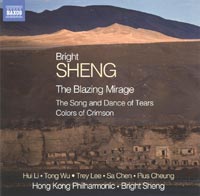 Description: Accessible and appealing concertante tone-poems, and remarkably successful syntheses of Chinese musical idioms in a neo-romantic western context. Song and Dance adds the distinctive sounds of the lute-like pipa and the sheng, a robust-toned Chinese mouth organ, to the orchestra. This, alongside scales and inflections borrowed from traditional Chinese music, in a setting of grandiose romantic gesture and flowing melody, produces an individual style, sounding somewhat like Hovhaness crossed with Rachmaninov, with some Shostakovich thrown in for good measure in the driven 'dance' episode. Colors takes its basic material from a folk-influenced melody by the composer, in a picturesque and atmospheric fantasia traversing a variety of moods from the gently lyrical to the insistently dramatic, with the mellow burbling stream of marimba tone a constant presence. Mirage was inspired by the Dunhuang Caves, an ancient repository of religious art and manuscripts. Beginning with an intense cello recitative, the work incorporates folk songs and dances into a lush romantic work of considerable magnificence and vivid imagery. Trey Lee (cello), Pius Cheung (marimba), Hong Kong Philharmonic; Bright Sheng.