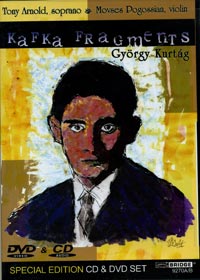 Description: The texts of these 40 brief aphoristic songs are fragmentary excerpts from Kafka's writings; frequently individual numbers bear a subtitle or dedication referring to an event or important figure in Kurtág's own life. The work as a whole, then, emerges as a shadowy, oblique succession of autobiographical sketches which could refer to either, or both. The music covers an extraordinary range of expression, frequently suggesting some far larger scene or drama glimpsed in the lightning-flash of a few seconds, with Kurtág's characteristic expansion of the significance of the tiniest musical gesture or phrase through its precise articulation or placement in relation to another. Both singer and violinist are required to 'act' through their instrument, testing the boundaries of what is technically possible, to exhilarating, sometimes disturbing effect. The DVD contains a live performance, different from the studio recording on the CD, filmed simply and thus allowing the work's eloquent narrative to emerge in even more involving fashion for the viewer; and a brief narrated documentary using masterclass footage to show the composer's meticulous attention to detail and provide a pleasing glimpse of his personality. Tony Arnold (soprano), Movses Pogossian (violin).