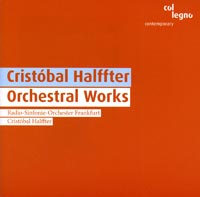 Description: Odradek is based on an ambiguous character - a concept more than a character - from Kafka; something that is sentient but not a being; an impermanent thing that has a past but only a tenuous hold on the present. Halffter has used this idea as the basis for a large tone-poem of satisfying complexity and ambiguity, in which little fragments of everyday existence; repeated sequences of common chords - are embedded in a shifting, unstable matrix of complex and largely atonal orchestral texture. The dramatic and energetic "Dortmund Variations", written for the orchestra of that city, is a virtuosic showpiece for the various sections of the orchestra; although Halffter never renounces a decidedly modern idiom, this work has a feeling of celebration and directness of appeal which it shares with Tiento, written for Paul Sacher's 80th birthday. This piece, based on transformed material from the 16th and 17th centuries, pays homage to tradition in several ways and emerges as a heartfelt and moving tribute to a long-time colleague and friend of the composer. Frankfurt Radio Symphony Orchestra; Cristóbal Halffter.