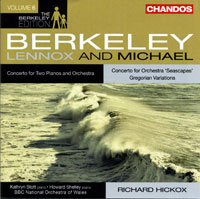 Description: A BBC Proms commission from 2005, son Michael's Seascapes may be his most instantly approachable work to appear in this series to date. Although often harsh and dissonant in sound (but not more harsh and dissonant than the seas off the Norfolk coast which initially inspired the work), the piece is instantly communicative, not least in its long, slow central movement which is dedicated to a good friend who, along with her daughter and mother-in-law, was drowned in the Sumatra tsunami. From the other end of his musical career, the 1982 Gregorian Variations include multiple chant melodies as well as the pop music influences then occupying the composer's time. Father Lennox's two-piano concerto, for Cyril Smith and Phyllis Selleck (1948) uses a very large orchestra and a two-movement form, in which a short opening movement is followed by a long (22-minute) theme-and-variations finale. Kathryn Stott, Howard Shelley (pianos), BBC National Orchestra of Wales; Richard Hickox.