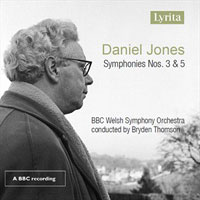 Description: The consistently outstanding quality of Jones' symphonic output all but guaranteed that this, the fourth entry in this exceptional series (09J057, 08T001, 01S001) would be a major release, and so it is. Jones' symphonies each have a distinct identity and contour - the composer disliked any suggestion of repeating himself either between works or within them - but all are carved from the same stern, no-nonsense tonal material, accompanied by restless metrical changes and effective, weighty orchestration tailored to present the flow of argument and interaction of ideas with minimal coloristic distraction. The Third is typically tough and dramatic; the sonata-form opening movement's material (even the second subject) is derived from variants of a theme presented in the slow introduction. The movement is tense and turbulent, the development section characteristically sinewy and contrapuntal, the recapitulation (eschewing literal repetition of course) further exploring the discursive themes, finally erupting in a tremendous climax and fading away. The slow movement is austere and hieratic, beginning with a stark theme on strings and hollow brass, which is then explored in a deeply tragic mood throughout the orchestra. A pulsing alarm introduces an agitated development section followed by a quiet conclusion that offers a measure of solace, still tinged with melancholy. The finale, also based on the symphony’s main material, is brisk and rhythmically vital, its first section fulfilling the function of sonata allegro and scherzo. In working out the conflicts of the first movement, the development adopts an increasingly martial tone. The second subject tries to introduce a more conciliatory element, and the symphony ends with a kind of bombastic, ambiguous triumph. The Fifth is equally dramatic and cogent in its symphonic argument, but true to the composer’s mission not to repeat himself it seems less angst-ridden than the Third, its conflicts more abstractly determined by musical concerns than the cathartic playing out of personal psychology. Perhaps the intervening symphony, a heartfelt memorial to his friend Dylan Thomas, somehow cleared the way for this architecturally, emotionally, and dramatically poised work. The first movement is a powerful sonata-allegro, with a striking main theme which incorporates a clipped semiquaver rising-falling motif irresistibly reminiscent of the first of Rachmaninov's Symphonic Dances. This is explored in various rhythmic guises, in mostly stormy moods, at one point taking on a noble British sweeping grandeur that could almost be by Moeran. A long, lyrical second subject is introduced, and the development pits these diverse elements against one another. The second movement is a robust, big-boned scherzo, a serious, forward-thrusting irresistible force of Brucknerian type, not a lightweight divertissement, despite the innocently chiming glockenspiel that nonchalantly introduces it and marks its main sections. The trio has a certain mountainous grandeur; then the glockenspiel announces a truncated recapitulation of the scherzo. The slow movement is a funeral march in stately contrapuntal textures (the composer described the whole work as his "most contrapuntal"), sombre, magisterial and imposing. The finale's main theme surges powerfully to life at the outset, and true to the character of the symphony as a whole this moderately paced movement is monumental and inexorable in its momentum, tautly structured in sonata form and contrapuntal interplay of themes. The music gathers excitement and brilliance in the coda, and the symphony reaches a satisfyingly decisive conclusion. BBC Welsh Symphony Orchestra; Bryden Thomson.