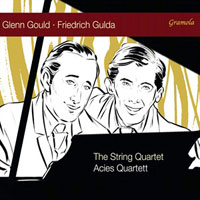 Description: Quartets by two controversial maverick geniuses of the keyboard that offer, in one case a fascinating glimpse of what might have been and in the other a thoroughly accomplished example of the development in progress of one of music's most unpredictable characters. Far from being a mere curiosity, Gould's Op.1 is a compelling journey through the crepuscular landscape of pre-expressionist late Romanticism. Prior to writing this work, Gould was enthused by the Second Viennese School (which remained in his performing repertoire); latterly he wrote very little music, though before his piano career had its meteoric rise he wrote a good deal, in a variety of styles. Somewhat surprising, then, is this work's complete avoidance of any serial technique or atonality. One characteristic that is no surprise at all; the absolute mastery of counterpoint, and the fact that the development section makes several determined efforts to become a full-blown, thoroughly worked fugue. The quartet is in a single span of more than half an hour, structured in sonata form - at least until the extraordinary recapitulation and coda, which are treated as a huge finale, to counterbalance the extended 'slow movement' incorporated into the development section. Wagner is obviously a major influence, though late Beethoven is often invoked; a beautiful passage in the development exudes Brucknerian serenity. Left to its own devices, though, the music gravitates toward the very end of late Romanticism in the mainstream - the Schönberg of the D minor quartet and Verklärte Nacht. This is a powerful, completely assured work by a mature and accomplished composer, with a sure sense of architecture and a compelling dramatic contour. Gulda, of course, was an acknowledged composer who had studied with Joseph Marx. Although this 1950 composition lacks the enthusiastic boundary-violating iconoclastic élan of his later partly improvised jazz-crossover works with which he delighted in peppering his recitals it is a fine work in the Viennese tradition, with a good deal of melodious charm and enough mildly modernist elements thrown in (the sudden wild outbreak of folk-derived fiddling in the third movement is a typically eyebrow-raising Gulda moment) to prevent it sounding old-fashioned. Acies Quartet.