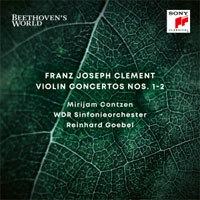 Description: Clement was considered one of the greatest violin virtuosos of his time and Beethoven dedicated his Violin Concerto to Clement by writing on the score “Concerto par Clemenza pour Clement” and which can be considered in response to Clement's first Violin Concerto of 1805 (first recorded back in 2008 by Rachel Barton Pine on Cedillle). The similarities between Clement's No. 1 and Beethoven's Op. 61 are by no means accidental. Rather, they reflect the way in which the two composers could refer directly to one another, tossing balls back and forth with a nod and a wink and sparking creative reactions – a process repeated in reverse in the case of Clement’s No. 2 that was written only a short time afterwards. Mirijam Contzen (violin), WDR Symphony Orchestra; Reinhard Goebel.