ISANG YUN (1917-1995): Ost-West-Miniaturen I and II for Oboe and Cello, Recontre for Clarinet, Harp and Cello, Interludium A for Piano), Quartet for Oboe and String Trio, Violin Sonata (First Performance of 1991 First Version). 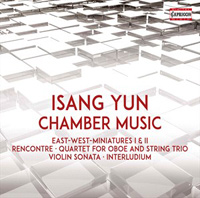 Description: This disc gathers together works from the 1980s and '90s, when Yun's style had become more of a matter of composing in the Western contemporary tradition, while incorporating elements drawn from traditional Korean music, rather than the collisions of avant-gardism and unintegrated traditional styles of earlier decades (the watershed occurring in the late 1970s with several great concertante works - see 11U054). These late works are more accessible, and more directly compelling emotionally. The superb Violin Sonata, of 1991, here recorded for the first time in its original and longer version, is such a work; uncompromising and yet accessible, with a pronounced dramatic arc and an almost neo-romantic level of expressivity. The Oboe Quartet occupies similar territory; 'bent' notes and microtonal inflections, here and in the 1986 Rencontre (for one of Yun's characteristically unconventional and timbrally innovative instrumental combinations) leave one in no doubt as to the national origins of the composer, but the works are readily assimilable by a Western audience with no especial taste for the extremes of the avant garde. Interludium A - the note A being a symbol of purity and perfection in Yun's later output (first encountered in the great Cello Concerto - 11U054) - is a thrilling, multi-faceted fantasia of melismatic variation and ornamentation around the pivotal note. Dense chordal textures and extravagant virtuosity gradually give way to serenity in a long, calm 'finale'. Shota Takahashi (oboe), Walter Grimmer (cello), Egidius Streiff (violin), Mariana Doughty (viola), Georg Arzberger (clarinet), Maria Stange (harp), Kaya Han, Markus Stange (piano).