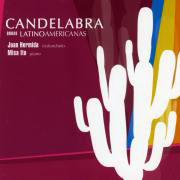 Description: Mata's sonata is an early work, from an accomplished young composer who had already achieved the beginnings of a mature style, but who put aside composition for conducting soon after. He apparently intended to resume composition in later years, but his untimely death robbed us of both a significant conductor and potentially a fine composer, if the early pieces are any indication. The sonata is a succinct two-movement piece in a style that might best be described as a youthful, angst-ridden, rather astringent derivative of late Shostakovich. The largest work here, and the most immediately approachable, is the Argentinean González' "Southern Boundary", a four-movement suite of tango-inspired music which depicts 'characterful' areas of Buenos Aires that embody the passionate, dangerous world in which the tango originated. In rather neoclassical style, two energetic outer movements frame a scherzo and a sultry slow movement. Risco's "Recounting" is similarly folk-modally based in tonality; the work is an autobiographical sketch of the composer's time in Mexico and incorporates many unusual technical devices, aside from requiring scordatura tuning of the cello. Nobre's "Challenge II" evokes the musical 'tournaments' between singers in the north-eastern Brazil of his youth; an introductory cadenza is followed by a vigorous, virtuosic dialogue on folk-inflected material. Juan Hermida (cello), Misa Ito (piano).