BUXTON ORR (1924-1997): Canzona for Voice, Clarinet and String Trio, Ten Types of Hospital Visitor for Voice and Double Bass, for Voice and Piano: The Painter’s Mistress, The Ballad of Mr & Mrs Discobbolos, Songs of a Childhood. 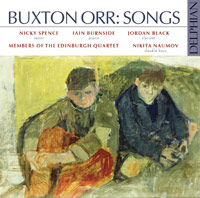 Description: Orr was a versatile and approachable composer, for whom vocal music was an important aspect of his compositional career. Although he was a student of Benjamin Frankel and interested in dodecaphony, he adopted his teacher's free use of the techniques and in his songs especially, probably with an ear for the singability of the music, restricted himself to a chromatic language far removed from serialism or atonality. He was born in Scotland, and his choice of texts reflects his awareness of his Scots heritage. The Canzona, elegantly scored for voice and small ensemble, sets Scots texts with originality and eloquent melodiousness. The Ballad sets a rather sour nonsense text by Edward Lear, with humor and a decided edge, which also applies to the drily humorous Charles Causley settings in a dialogue with double bass (one of Orr's students was Gary Karr, and the string part is of quasi-vocal expressiveness and wide-ranging virtuosity). The Songs of a Childhood, setting verses by Scots poets in Scots dialect, are the earliest and most tonal and immediately accessible works here; six miniature sketches in a style in which the influence of folk music and Britten can be discerned. Texts included. Nicky Spence (tenor), Iain Burnside (piano), Jordan Black (clarinet), Nikita Naumov (double bass), members of the Edinburgh Quartet.