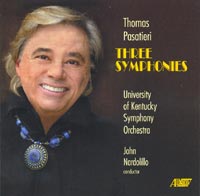 Description: In view of his vast experience of writing appealing, lyrical operas, it comes as no surprise that Pasatieri's symphonic writing has an unerring sense of dramatic narrative, and the very highest level of melodic inspiration. The works are thoroughly tonal, boldly neo-romantic in harmony and rich orchestral color. As the composer has said, he never gets far from the voice, and this is reflected in the eloquently lyrical solos with which these instrumental works are amply supplied. The First Symphony, a compressed seventeen minute single span, opens with great drama, then develops a lush flowing melody, until a horn 'cadenza' introduces a gently melodic slow section. This is interrupted by a martial episode with fanfares which confronts the theme from the first section, which ultimately prevails. A trumpet solo introduces a lilting episode, still based on the main theme. The piece gathers momentum and intensity, then a sudden return to the opening gestures heralds a final statement of the theme in grand peroration. The Second is on a much larger scale, cast in four separate movements. Described by the composer as representing the cycle of life and death, it begins in a spirit of optimism and determination. The first movement is secure and confident, a young life over which no shadow has yet been cast, brimming with youthful bravado. The slow movement introduces a tenderly lovely theme, redolent of summer, love, passion, the full bloom of life. A bucolic second subject becomes more forceful, in vigorous episodes which then subside to make way for the return of the initial theme, now powerfully passionate, with a counterpoint of mounting anxiety. The following scherzo exudes rudely boisterous good health, bustling and energetic, with a more meditative trio. When the scherzo returns, however, in a wholly unexpected plot twist, sudden calamity befalls the protagonist, and the music abruptly takes on a darker, tragic aspect as a catastrophic intimation of mortality descends unheralded. The finale acts as a summary of the preceding narrative, introducing material from the earlier movements, now lent an additional dimension as a quasi-operatic setting of the Credo. This begins as a powerfully affirmative statement of faith, but at 'crucifixus', the music of tragic adversity from the third movement recurs, and the music never fully recovers, as though assailed by doubt. Undermined by grinding dissonances, even a final, sweeping statement of the second movement theme fails to make headway, and the work ends enigmatically, flickering out with a chilly rendering of a sinister children's rhyme. The Third returns to the economical dimensions of the First, though with less of the cyclic concentration of the earlier work. It comprises a serious opening movement, rather Wagnerian, followed by a very brief, playful scherzo, a return to German late-romanticism in the serenely flowing slow movement, and a lively, optimistic finale. Catherine Clarke Nardolillo (soprano), Lexington Singers Children's Choir, Danville Children's Choir, University of Kentucky Symphony Orchestra; John Nardolillo.