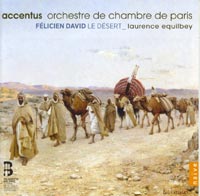 Description: David was the creator of French musical "orientalism". A member of the Saint-Simonian sect, he traveled through Turkey, Syria, Palestine and Egypt and used Syrian, Arab and Egyptian motifs in this work which was premiered in 1844. This must-have for collectors of Romantic musical exoticism was recorded on Capriccio in 1991 and reissued at mid-price (05K055). But this one has English translations of the texts (the previous one was French-German) and you can get rid of the reciter if you don't feel like practicing your French listening comprehension. 2 CDs for the price of 1 (one with reciter and one without). French-English texts. Cyrille Dubois, Zachary Wilder (tenors), Jean-Marie Winling (reciter), Accentus, Orchestre de Chambre de Paris; Laurence Equilbey.