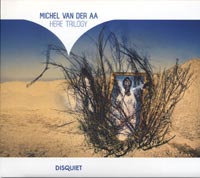 Description: These works tell a story, so vividly as to count as a contemporary reinvention of program music. An individual 's relationship to her surroundings - surroundings that are frequently hostile and oppressive - is the theme of this miniature drama, almost an opera for non-operatic forces. In the first piece, the human figure is unheard, and only appears in a piece of onstage theater; the conflict between the human element and the machine - van der Aa's tape part, using repeating loops of orchestral samples, noise and mechanical clicks, is very menacing and in obvious conflict with the ensemble, and the solo violin who emerges from it at the end to be temporarily subverted into mechanical repetition. In the second piece, the soprano, singing a text full of existential questioning by the composer, is recorded and played back in real time, along with extracts from the ensemble music producing a suffocating feeling of inescapable cyclic repetition, a powerful dramatic device. The final piece sees the solo protagonist drawn into the ensemble and its recorded alter ego, then drifting into a detached disengagement, as the instrumental sounds, no longer confrontational, become increasingly fractured, glacial and expressionless. The composer's idiom is far from atonal, with chromatically dense harmonies and soaring melodic lines in conflict with opposing forces represented by the literal repetition of the machine and bursts of pure noise effects, rather than harsh discord. Texts included. Claron McFadden (soprano), Netherlands Radio Chamber Orchestra; Etienne Siebens.