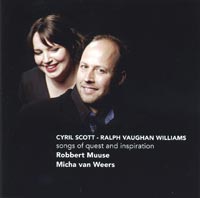 Description: World Premiere Recordings of all but two or three of the 13 Scott songs, some of them rather popular at the time they were written (especially Blackbird's Song) but others make use of often dissonant tonalities and, in the "oriental"-influenced pieces lik Sundown or Picnic, repetetive rhythms were quite modern and daring for their time. Texts included. Robbert Muuse (baritone), Micha van Weers (piano).