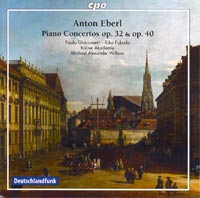 Description: Both these concertos were completed by 1804 although work on the earlier one might go back to the late 1790s. Eberl sounds much more like Mozart in his piano concertos than in the symphonies recorded by Concerto Köln on Teldec. From the thematic material to the instrumentation (with delicious use of winds) one thinks of late Mozart (and, of course, Eberl was a friend of Mozart, travelled with the widowed Constanze on a German tour performing both his concertos and piano chamber music, and had some of his compositions published (to his dismay) under Mozart's name. Both soloists use a c.1810 Müller Viennese fortepiano. Riko Fukuda (fortepiano, Op. 32), Paolo Giacometti (fortepiano), Die Kölner Akademie; Michael Alexander Willens.