BRIAN EASDALE (1909-1995): The Film Music of - Ballet from The Red Shoes, Suites from Kew Gardens, Black Narcissus, Adventure On! and Gone to Earth, Prelude and March from The Battle of the River Plate. 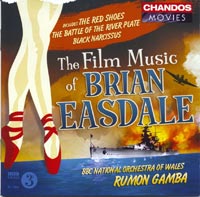 Description: Obviously, Easdale is best-known for his score for The Red Shoes but three of the other scores he did for the director team of Powell and Pressburger included here are equally masterful, especially the choral-orchestral score for the exotic fever-dream of Black Narcissus. Also here is a score Easdale himself adapted for concert performace: Adventure On!, a 1957 tractor company documentary (that's right!) which he dedicated to Barbirolli and the Hallé (who, however, did not perform it). BBC National Chorus and Orchestra of Wales; Rumon Gamba.