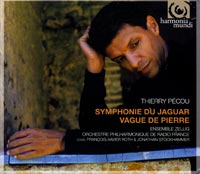 Description: As in the piano concerto that we offered in 2008, an irresistible rhythmic drive is central to these works, which celebrate the composer's fascination with two different ancient cultures. The Symphonie du Jaguar, with its unusual ensemble of soloists, explores the mysteries of the Mayan civilization, setting extracts from ancient texts as part of the fabric of a constantly active texture which uses persistent ostinati and motoric repeated fragments to provide a sense of forward momentum. Much of the material is basically tonal and neo-romantic, though the composer certainly allows himself ample license to draw from more modern vocabularies ad lib, for enhanced coloristic and expressive effect. 'Stone Wave' ( a literal translation of the name of a 17th Century Chinese painter) is more conventionally scored, with a well-defined four-movement symphonic structure. Again, there is a strong sense of underlying tonality, and a feeling of restless, questing motion, even in the piece's tranquil and meditative sections. Translated texts included. Ensemble Zellig, Orchestre Philharmonique de Radio France; François-Xavier Roth, Joathan Stockhammer (Vague).