PELLE GUDMUNDSEN-HOLMGREEN (b.1932): Plateaux for Piano and Orchestra, For Piano. 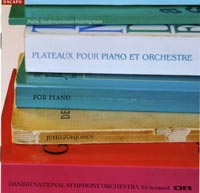 Description: The substantial (38 minute) Plateaux is in nine movements, apparently calculated to offer the maximum contrast of texture. G-H specializes in juxtaposing the avantigarde and the banal, the sweetly simple and the brutal, and this piece rejoices in doing just that. Coarse, pounding music that might do very good service in the score to some dreadful monster-infested B-movie rubs shoulders with far more sophisticated but no less dissonant, somewhat Messiaen-reminiscent material, before giving way to music of childlike simplicity (and ending with the neurotic examination and re-examination of a fragment of Mozart). For Piano consists of three pieces, somewhat thematically related but self-contained. The first is a study in contrasts, harsh jabbing chords and simple consonant intervals and unusual combinations of unremarkable chords, which in its central section falls into a rocking motion which pervades the second movement, Lullaby. The last movement begins with a reminiscence of the first, but soon settles into the mood of the second and the harmonies and textures of the 'New Simplicity' with which Gudmundsen-Holmgreen was associated when he first turned away from serialism. Juho Pohjonen (piano), Danish National Symphony Orchestra; Ed Spanjaard. SACD hybrid.