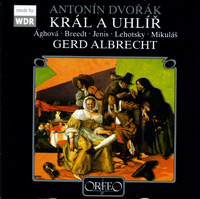 Description: In December of 2001, we offered a single-disc version of this work with the following blurb: "Originally composed in 1871, this, Dvorák's second opera, received two revisions, the last being in 1887 and further modifcations and cuts were made in it for this 1989 recording for Czech television. The first version was harmonically adventurous and incorporated Wagnerian elements; the second and last versions are substantially different and in a simpler style, more Lortzing than Wagner." Here we have a live recording from 2005 which is full-length (114 minutes) but which uses a conflation of a second revision and a 1914 version by Karel Kovarovic (whose opera The Dogheads has also appeared on this label), which makes this the most complete version of the opera currently available on disc. 2 CDs. Czech-English libretto. Lívia Ághová (soprano), Michelle Breedt (mezzo), Markus Schäfer (tenor), Dalibor Jenis (baritone), Peter Mikulás (bass), Prague Chamber Choir, Cologne Radio Choir and Orchestra; Gerd Albrecht.