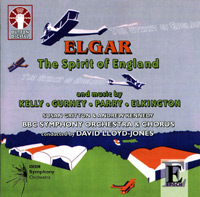 Description: A disc of elegies for World War I war dead, all world premiere recordings (the Elgar in its original, two-voice version). Two orchestral: Gurney's work is from late 1920 and its tortured march rhythms tell us as much about his fracturing mental state at the time as they do about other war victims; Elkington's eight-minute tone-poem was inspired by the 1921 arrival of the Unknown Warrior on a heavily misty day - a remarkable work for a 20-year-old woman in that time. Parry's 1916 piece, in full-throated Elgarian splendor, sets texts by Robert Bridges in memorial of the thousand-plus killed when the battleship Invincible exploded at Jutland earlier that year. Texts included. Susan Gritton (soprano), Andrew Kennedy (tenor), BBC Symphony Chorus and Orchestra; David Lloyd-Jones.