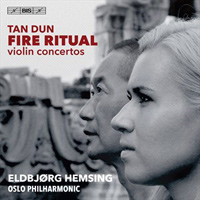 Description: With his social conscience (UNESCO Global Goodwill Ambassador), prolific talent and flair for blending accessible, tonal Western idioms with just the right amount of local color from his Chinese heritage, Tan Dun has received wide recognition and many honors and awards. These violin concerti are fine examples of his crowd-pleasing contemporary idiom. 'Rhapsody and Fantasia' is in two sections, which effectively comprise two three-movement violin concerti, one based in the West, the other in the East. "Rock the Violin in Rhapsody" begins and ends with strongly rhythmic sections in uncomplicated harmony, both titled "Hip-Hop", which suggests that the composer, despite having lived in New York, has never heard any. These energetic movements bracket "Malinconico", a slow elegy in Mahlerian chromaticism. The second 'mini concerto' is A Dream out of Peking Opera, in which the instrumental timbres, melodic contours and harmony emulate those of Chinese traditional music. "Fire Ritual" is "A music ritual for the Victims of War", in linked sections: "Cruel Wars", "Innocent People", "Mantras of the Heavenly Birds", and "Eternity". Strident rhythmic martial music is the recurring war motif; 'special effects' that would not be out of place in a film score - shouts, clangorous percussion, an episode of what sounds like throat singing, an avian chorus in chirping string harmonics - color the score, while keening laments from the soloist and gentle folk-like mourn the victims of conflict. Eldbjørg Hemsing (violin), Oslo Philharmonic Orchestra; Tan Dun.