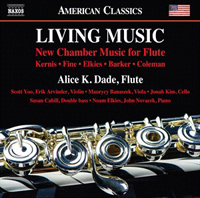 Description: An attractive recital of tonal 'contemporary' music from the late 20th century and early 21st, mostly in world premiere recordings (of these versions at least). Kernis' Air is a Romantic, highly melodic 'love letter in music'. Michael Fine's career in music has been on the other side of the microphones, so to speak, but he started to compose in 2013 as a means of coping with his wife's serious illness. Skipping Stones is a nostalgic reminiscence of the childhood game, pastoral but with a certain harmonic and rhythmic quirkiness. Elkies is a mathematics professor at Harvard with a parallel career in music, but otherwise he has little in common with Tom Lehrer. Having said which, his music is certainly very entertaining, to judge by this contemporary take on the Baroque flute sonata (it was originally written for Baroque instruments). The first movement sounds more or less authentically Baroque; the second has a restricted flute part which explores tone color, and the third re-imagines the Baroque lament of the first in the style of a cheeky jazz 'arrangement'. Barker's pieces impressionistically evoke the landscape and atmosphere of three neighbouring mountain ridges in the Scottish Highlands. Coleman's piece alternates passages that relate to Bach with a more contemporary 'commentary' featuring 'symmetrical' chords, 'mirrored' around a pitch 'axis'. Alice K. Dade (flute), Scott Yoo, Erik Arvinder (violin), Maurycy Banaszek (viola), Jonah Kim (cello), Susan Cahill (double bass), Noam Elkies, John Novacek (piano).