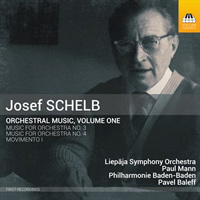 Description: If any of you symphony collectors has read this far, we should point out that, according to the notes, Schelb may have called his series of five Music for Orchestra works “symphonies”, had that word not been consigned to the dungeons of eternal execration by the Lords of Modern Music in Germany at the time they were composed (1972 for the two here). They’re in three movements whereas the Movimento series, of which we have the first one (1969), are shorter (16 minutes here) single-movement pieces. Both types are in the same tonally liberated, quasi-Expressionist contrapuntal tradition of Hindemith and Karl Amadeus Hartmann; Bartók was an important influence, too and some people might think of Weill’s two symphonies or of Henze in his non-avant-garde periods. The three pieces recorded here also show Schelb capable of astonishing vitality in his mid- to late seventies: they display lean muscularity, freewheeling energy and luminous and transparent orchestration, often informed by bucolic nostalgia and lyrical melancholy.