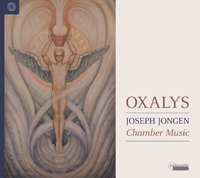 Description: The major work here, only previously available on a Cyprès recording offered in 2005 (the label is out of the US market now) is the 1923 Concert, a 22-minute work in three movements follows neither Franckian Romanticism nor Debussian Impressionism but exists in their neighborhood, the neighborhood which was Jongen's personal, not-easily-described style. The two pièces en trio (1926) are close in style to the Concert while the 1922 Rhapsodie has surprising echoes of Stravinsky and Ravel. Oxalys.