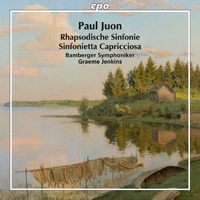 Description: Unlike the two early symphonies we offered on Sterling, these are quite late works and date from 1938 and 1939. The symphony was even premiered at the 1938 Reich Music Days in Düsseldorf, just two days before the infamous Entartete Musik exhibition in the same city. Hardly fodder for Nazi music-Nazis (see what I did there?), it was only ever performed one more time until this recording (in Chemnitz in Feb. 1939). In two movements lasting 43 minutes the work lives up to its name in its freely flowing design and, though you may hear hints of Mahler, R. Strauss and even Schreker (possibly an intentional nod to a “degenerate” colleague), what you get is the synthesis of a lifetime of musical experience into a mature and personal late Romantic style. In fact, given its date, it may be one of the very last late Romantic symphonies written. As advertised by its title, the Sinfonietta, a three-movement work of 29 minutes, is of a deceptively lighter character, with a wealth of thematic ideas thrown at you capriciously and playfully but also with many possible half-hidden references to contemporary music all wrapped around an intimate adagio second movement. Bamberg Symphony; Graeme Jenkins.