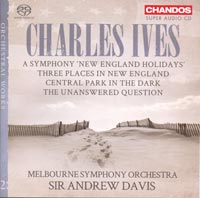 Description: Ives gets the Chandos audiophile treatment as well as some orchestral juggling: a note by the conductor outlines several ways he has adopted to make portions of thickly orchestrated scores, with things like a solo flute marked piano playing against strings marked forte, audible to the listener. In Thanksgiving and Forefather’s Day (last movement of New England Holidays), he even records the distant sounds of choir practice (drowned out in actual performance by the rest of the orchestra) separately and superimposes them with a degree of spatial separation in the mixing process. For a composer often quoted as caring less about correctness of notes and more about “the spirit of the thing”, hearing everything he wrote might actually have appealed as part of the latter. Melbourne Symphony Orchestra; Andrew Davis.