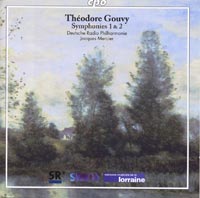 Description: Gouvy's first symphony dates from 1845 and, unlike his later ones, Mendelssohn isn't the first thing you think of (that comes in the final movement). The first movement allegro maestoso has a rolling, almost marine-like sweep which recalls the similar broadly conceived movement in Schumann's Third. A bright and brisk scherzo and another Schumannesque slow movement lead to a boisterous finale which, however, slows at the approach to the coda, which arrives with a much slower tempo, richly upholstered by the horn section and very reminsicent of the finale of Mendelssohn's Scottish. The Second (1849) is Gouvy's "Beethoven Eighth", with "unbuttoned" energy in all three of its fast movements, the first galumphing happily along just like Beethoven and the finale almost a Mendelssohnian tarantella but with a German accent. This was the most-performed symphony in the composer's own lifetime. Deutsche Radio Philharmonie Saarbrücken Kaiserslautern; Jacques Mercier.