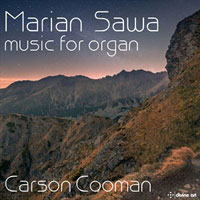 Description: Sawa was an immensely prolific composer, especially of organ music, and especially famous for his gifts as an improviser. Basing his style on the Polish romantic musical tradition, he incorporated Polish church hymns, folk music, and Gregorian chant into his compositions as well as influences from the Polish avant-garde, including cluster harmonies and sonoristic effects (in moderation). Sequence I is a large, powerful exploration of the ubiquitous plainchant. There are, of course, thunderous apocalyptic climaxes - how could there not be, with the resources of a large Romantic organ and the subject of the theme? - but the composer allows the astonishing potential of the plainchant, used in more extended form than most Romantic works based on it, to speak for itself in a quasi-improvisatory sequence of variations and reflections, including a lovely, gentle fugue on a theme derived from the main one, before the final climax. Resurrection (1975) is based on the Easter story, and quotes the Easter sequence "Victimae paschali laudes”, also the subject of Sequence II (1996) in which it is quoted in extenso, punctuated by thunderous chords and exultant figuration. The earlier work is noticeably more dissonant, and the monumental piled-up chords that conclude it are one of the few times when Sawa resembles Messiaen. Passacaglia, Sawa's last organ work, written just months before his death, is based on a 19th century Marian hymn. There is a certain austerity to its stern, steady procession toward a final granitic climax, free of exaltation, the dying composer seemingly contemplating his mortality. Three Dances in Old Style (1998) evoke Polish folk music, while the contrasting movements of the 1980 Suite find the composer having fun inventively exploring forms including aria, French-style symphonic toccatas, chant, and folk dance. A first-rate cross-section of superb works from one of the greatest figures in 20th century organ music. Carson Cooman (organ).