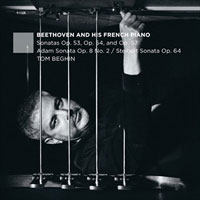 Description: In 1803 Beethoven received a piano from Erard Frères in Paris. Why had he been so keen to own a French instrument and how did it inspire him, both as a pianist and a composer? The answer may lie in these performances on a new replica of Beethoven’s French piano, created as part of a unique research project. Placing the iconic “Waldstein” and “Appassionata” sonatas alongside equally grand pieces by two of his Parisian contemporaries (the Adam [1801] is 31:53 and the Steibelt [1805] is 44:38), they reveal an unfamiliar French aspect to Beethoven’s genius. 2 CDs + 136-page booklet. Tom Beghin (replica of Beethoven’s 1803 Erard Freres fortepiano).