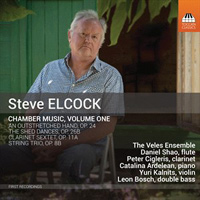 Description: Having hailed Elcock as one of the major musical discoveries of our time and lavished encomia upon Toccata Classics for having propelled him into public view (for the background to his unacknowledged compositional labors and their overdue emergence into the light, see 09T001 from last September), it is a pleasure, though hardly a surprise, to be able to report that his chamber music appears uniformly to hit the same high standard. An Outstretched Hand is the most substantial piece here, very recognisably from the same hand that penned the powerful, emotionally dynamic orchestral works on the previous disc, with their blend of gravitas, drama and glimpses of apocalyptic visions. Taking its impetus from the contrasting images of a handshake and hands stretched out in supplication and succour, the work ended up, almost unwittingly, as a commentary on the refugee crisis in Europe, which was developing at the time of composition. A single span in contrasting sections, the work's dramatic arc encompasses sorrow, despair, violence, flight and the ambiguous promise, or memory, of peace. The Trio is also serious, a less emotionally complex confrontation between agitated, angry music and a static chorale, both developed in various guises but never achieving resolution. The Clarinet Quintet is beautifully crafted, classically proportioned, Romantically inspired work, with a sonata-form first movement, a central, very Romantically lyrical Romanza and Scherzo, and a variation finale, finally revealed to be based on a folk reel, with clever, disguised allusions to other composers' uses of the clarinet. The quirky Dances contrast ataxic unpredictability (there's a story there; see the booklet notes) with rhythmic vitality and a sense of fun (with an unexpectedly heartfelt slow pavane full of genuine pathos). The Veles Ensemble with Daniel Shao (flute), Peter Cigleris (clarinet), Yuri Kalnits (violin), Leon Bosch (double bass), Catalina Ardelean (piano).