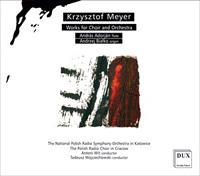 Description: Another welcome issue in this important series. Meyer is a composer with a potent, communicative voice, which has remained consistently approachable even as his idiom evolved, as this disc of impressive large-scale works from the 1980s and 90s demonstrates. He is a noted authority on Lutosławski and Shostakovich, and these pieces come from the period when the latter was superseding the former as the major influence on the composer's style. The Hommage à Brahms begins with and contains obvious allusions to Brahms, especially the First Symphony. For the most part, though, it sounds very like Shostakovich, to the point where, had the Russian composer felt moved to write a piece with similar intentions it might well have emerged sounding like this muscular, dynamic and dark-hued tone poem. The finale of the flute concerto (1983) was the last time Meyer used 'controlled aleatoric' techniques derived from Lutosławski in his music, and interestingly several of the work's four movements seem to progress toward the vocabulary of the Hommage. In the first movement the alto flute plays lyrically, initially against fluid clusters, with a tonal centre being established only later in the movement. The second movement uses the piccolo, and both this and the following movement, which features the bass flute, follow the trajectory toward greater tonality as they progress. The finale sums up the work, building a powerful climax with the concert flute offering a lyrical conclusion. Farewell Music is an homage to Lutosławski, but by 1997 his influence on Meyer had waned, and the music is based on the astringent extended tonality of the composer's latest period, with richly colorful orchestration and harmonies that recall Messiaen. The Mass is quasi-symphonic and dramatic - the Credo, for instance, is a vigorous allegro that belongs in the concert hall more than in church, and the magisterial opening of the Sanctus is a moment of symphonic magnificence - and will appeal to anyone who enjoyed Meyer's hugely impressive The Creation of the World (10Q075). Allusions to mediæval and Renaissance polyphony are also to be found here and in the Kyrie and Agnus Dei, which are more restrained and liturgical in mood. András Adorján (flute), Andrzej Białko (organ), Polish Radio Choir Cracow, National Polish Radio Symphony Orchestra Katowice; Antoni Wit, Tadeusz Wojciechowski (Flute Concerto).