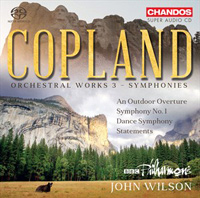 Description: The overture is a cheerful and breezy piece composed in 1938, as part of an initiative encouraging “American Music for American Youth”. Originally written for organ and orchestra, the First Symphony is presented here in its revised version (1926-28) for large orchestra. The six concise movements of Statements (1932-35) introduce a new style, their gritty soundscapes examples of what Copland later would refer to as ‘hard-bitten’ pieces. The concluding work is the expressive, fantastical Dance Symphony (1929) which explores different styles of symphonic movements, its dark aura a residue of its origin as a ballet on a grotesque vampire theme, composed 1922-25 and named Grohg. BBC Philharmonic; John Wilson.