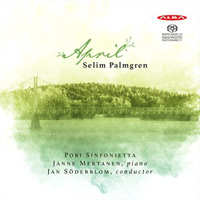 Description: In September of 2016, we offered the first volume of what we called “Palmgren’s condensed version of “The Romantic Piano Concerto”’. Like the first three, the fourth is in single-movement form, this time lasting 19 minutes. Exuding the bright, chilly joy of a Finnish early spring, it contains elements of impressionism, late Romanticism and neo-Classicism. The Fifth is the composer’s only multi-movement (the usual three) concerto and, at just under 25 minutes, is the longest of them all only by a bit. Written in Helsinki in 1940-41 it does away with all but a simplified late Romanticism with a triumphal first movement, simple songlike slow one and a resolute finale with march elements; Sibelius heard its radio premiere and told Palmgren that it was the best thing he had ever written. New to disc is the 14-minute Pastorale whose warm lyricism and hints of Finnish folk music bely its creation in the midst of the Finnish Civl War in 1918. Janne Mertanen (piano), Pori Sinfonietta; Jan Söderblom.