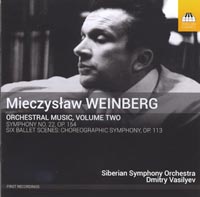 Description: The grievously ill composer completed the piano score of the symphony, his last composition in 1994 but was never able to orchestrate it. Umansky is a professor of orchestration at the Moscow Conservatoire and spent months studying Weinberg’s late orchestrational styles before orchestrating the symphony in the winter of 2001. The work is in three movements (Fantasia, Intermezzo and Reminiscences) lasting 40 minutes and is austere and sometimes valedictory in spirit but never lachrymose or self-indulgent; as recorded here, it sounds like an impressive final testament. The Ballet Scenes are selections of music from an unperformed ballet score of 1958 (the subject is a Japanese student blinded in the bombing of Hiroshima who is later cured of her blindness by Soviet doctors), re-ordered and augmented with newly composed material in 1973. There’s some rip-roaring fast music and some tender slow music with a thread of Orientalism running throughout. Siberian Symphony Orchestra; Dmitri Vasilyev.