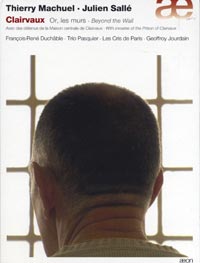 Description: The 12th-century abbey of Clairvaux was converted into a prison in 1808, and is now a maximum security jail in which many of the prisoners are serving life sentences. Machuel participated in a project in which texts from the correspondence between the prisoners and the monks of Citeaux, and their creative writing exploring their unique perspective as human beings isolated from humanity, were set to music. The result is two moving sequences of choral settings, unsurprisingly largely sombre and meditative in tone, in a mainly tonal vocabulary, with suggestions of folksong or church chant here and there, and some spoken recitations of text, a few vocal 'special effects' (whispering, whistling) and occasional percussive sounds (some provided by noisemakers produced in the prison's workshop) for emphasis. The instrumental works on the second disc are a set of elegiac reflections on the composer's experiences during the project, in a mid-20th century, mildly dissonant tonal vocabulary; a dark-hued sting trio, all suspended time telling use of silence, with an impassioned climax, soon replaced by static meditation; and a written-out improvisation for piano duet, a threnodic work of tolling bells and heavy-treading, obsessive ostinati. The hour-long documentary on the DVD serves two functions; providing some background on the genesis of the music, arising from the composer's writing workshops held with prisoners, which provided source texts for the choral works; and immersing the viewer in the somber, haunted atmosphere of the abbey-turned-prison. As befits its subject - the latter aspect at least - its is an extraordinarily static piece of film-making, much of it consisting of stationary images or slow tracking shots of the halls, corridors and courtyards of the prison, accompanied by extracts from the music, or recitations of the prisoners' poetry. Even footage of the composer at work often consists of him sitting still, talking to the prisoners or listening to recordings of their words. The result is less a documentary in the traditional sense than a kind of extended music video, a piece of multimedia art in its own right, and an effective one. As a bonus, the quarter-hour Lebensfuge is presented in its entirety with a visual accompaniment using footage from the main film overlain by quasi-abstract images of fire and smoke. The DVD is a no-frills production with French and English subtitles, 4:3, 2-channel, region-restricted to Europe and Japan but playable in the USA on a multi-region player or with the appropriate software on your computer. 72pp paperback-sized illustrated booklet with essays, texts and translations. 2 CDs & DVD. François-René Duchable (piano), Régis Pasquier (violin), Bruno Pasquier (viola), Roland Pidoux (cello), Thierry Machuel (four hands piano), Les Cris de Paris; Julien Sallé.