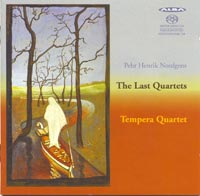 Description: The markedly idiosyncratic and individual composer's last two quartets, composed at the very end of his life, have a clearly autobiographical subtext, recalling with some nostalgia but without sentimentality, early influences. The Tenth is an homage to Shostakovich, whose quartets were always important to Nordgren. The first movement is a somber Nocturne, with scordatura tuning for an especially dark-hued timbre. This quotes from an early work by Nordgren, another autobiographical touch. There follows a brief, boisterous, rather Beethovenian scherzo, and a reflective Passacaglia. The finale incorporates a tinkling bell, recalling the composer's period of study in Japan, and progresses toward a serene resolution. The Eleventh continues this theme of a peaceful acceptance of mortality and a harmonious reflection on a life well lived. Again, the music is thoroughly tonal, though not to the exclusion of some flexibility of harmony and form (for example, scordatura tuning in the first movement is retuned during the second), an analogy of the unpredictability of life. After a profound and lamenting slow movement with clustered dissonances and a slow folk-music based chorale, the finale is a brief epilogue of farewell, with much the effect of the conclusion of Mahler's Ninth. Tempera Quartet. SACD hybrid