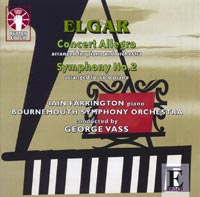 Description: Elgar apparently planned to orchestrate his 1901 Concert Allegro, then sent it to someone else to do so and the manuscript was lost until 1968. It contains orchestration notes and pianist Farrington produced this arrangment in 2007. Unhappy with Karg-Elert's reductions of the two symphonies for piano, Farrington did this one in 2009, noting that the German had never heard either symphony and that it showed in his layout of the motifs, harmonies, etc. The improvisations were transcribed in 2004 from 78rpm discs Elgar made in 1929. Iain Farrington (piano), Bournemouth Symphony Orchestra; George Vass.