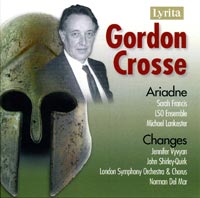 Description: Written to a commission for the Three Choirs Festival in the north of England, the choral heart of England, long associated with Elgar and other leading figures of British music, 'Changes' was conceived by the composer to achieve the maximum public appeal without compromising his personal æsthetics and standards. Seeking to breathe fresh air into the English Oratorio tradition, which Crosse characterized somewhat harshly though not entirely unjustly as being weighed down with "insufferable moral earnestness  a fog that cannot be blown away merely with triviality", he chose a cycle of texts which present a lyrical and dramatic structure, almost operatic, apart from the deliberately attention-grabbing opening, with its symphonic sweep and sonorities of bells (the texts here are inscriptions from bells). One is reminded of a similarly thematically self-referential, intensely chromatic narrative drama from a generation earlier, Lambert's masterpiece 'Summer's Last Will ", which similarly stands apart from the soft-centred oratorio tradition. 'Ariadne', though not explicitly programmatic, depicts the Ariadne/Theseus myth, and it is hard not to detect in the long, interwoven solo oboe line, the thread through the labyrinth. Alternating chromatic episodes with an open-air lyricism, evoking the dark drama beneath the heat-haze of the Mediterranean sun, the work is a study in atmosphere and narrative variety. Texts included. Original 1970 and 1976 LP releases.