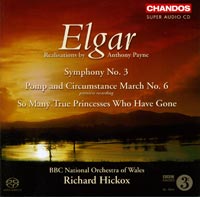 Description: The fourth recording of Payne's brilliant "elaboration" of Elgar's final symphony sketches comes with two rarities: the world premiere recording of the sixth Pomp and Circumstance March, whose sketches were only discovered in the library of the Royal School of Church Music in 1996 and which the Elgar Will Trust commissioned Payne to complete in 2005, and a memorial work from 1932 for the dedication of a monument to the Queen Mother. Written for chorus and band, only a vocal/piano score existed which Payne orchestrated for a 2002 premiere at the Aldeburgh Festival. Adrian Partington Singers, BBC National Orchestra of Wales; Richard Hickox. SACD hybrid.