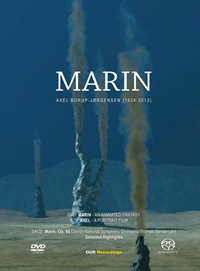 Description: This set is a meticulously assembled and detailed composer portrait / tribute of and to this unique Scandinavian individualist. Its center of gravity is the 20-minute seascape for large orchestra, Marin, a score that explores both microscopic detail (otherworldly zooplankton, perhaps) and macroscopic monumentality - continent-wide ocean surges and currents. Huge swirling masses of orchestral texture coexist with filigree solo writing, the orchestra often divided into many parts. Like most of the composer's mature works the language is freely atonal, though individual components can be derived from almost any idiom from non-functional tonal harmony to cluster-based sonorist textures. The other pieces on the CD share Borup-Jørgensen's exquisite ear for timbre, his love of novel instrumental combinations, always notated with the utmost clarity and originality, and constant references to natural sounds. The Op.18 work has the strongest connection to conventional melody and rhythm, with shades of Bartók; his last work, Pergolato, sounds entirely like a wild, lonely bird's song, apparently free of the constraints of 'music' and suggesting a direct translation of natural sounds. The DVD contains an interesting documentary on the composer, in which a number of his distinguished composer-colleagues strive to explain the unexplainable phenomenon of Borup-Jørgensen's genius to the accompaniment of filmed extracts from his music; and an 'animated fantasy' film set in a minutely detailed, voluptuously rendered undersea landscape that draws on imagery from surrealists including Dalí, Ernst, de Chirico, Giger and sketches and drawings by the composer, who was an accomplished graphic artist who decorated his scores with little figures and diagrams. The film 'accompanies' a complete performance of Marin.