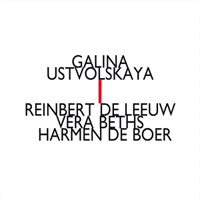 Description: The early (1949) Trio was written when Ustvolskaya was studying with Shostakovich. Although later in life she vehemently repudiated her former teacher, both personally and musically, there are clear points of contact here, though interestingly the Trio's spare, strained tension anticipates the very late Shostakovich, raising the question of who influenced whom, or whether the bleak world view of the outsider Ustvolskays merely resembles that of the death-obsessed Shostakovich of his final years. The substantial Duet of 1964 and the 1986 Sonata are more typical of Ustvolskaya's own mature style, alternating violent, brutal attacks with a withdrawn, barren silence in the face of impossible odds. Reinbert De Leeuw (piano), Vera Beths (violin), Harmen De Boer (clarinet). Original 1992 release.