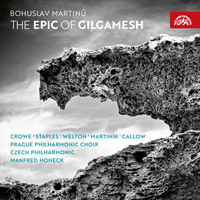 Description: How many of you knew that Martinů originally used an English translation of this 4,000-year-old Sumerian epic for his choice of excerpts to form his cantata on the ever-fresh topics of friendship, love and death? This was a 1926 London publication by Reginald Campbell Thompson which, for all its 20th century date may suggest, is still rather Victorian in style. Martinů chose English to help ease its performance future but the work has usually ended up being given in Czech or German. So, featuring three English, one Australian and one Czech performers, this is for Martinů specialists. Texts included. Lucy Crowe (soprano), Andrew Staples (tenor), Derek Welton (baritone), Jan Martiník (bass), Simon Callow (narrator), Prague Philharmonic Choir, Czech Philharmonic Orchesra; Manfred Honeck.