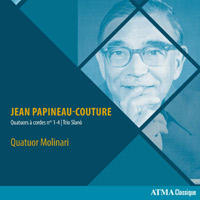 Description: Papineau-Couture was a significant figure in Canadian musical culture in the second half of the twentieth century, but he appears not to have had widespread recognition for his compositional career. These quartets chart the progress of a highly accomplished composer through the trends of the 20th century, from the legacy of his early French-derived American training (Quincy Porter and Nadia Boulanger) to navigating the thickets of modernism (and avoiding serialism, but experimenting with extended techniques) to a late, spare, personal idiom. The brief first quartet is very neoclassical, consisting of a slow march and a vigorous dance. The Second is much more chromatic, and is larger and more ambitious, in four movements. The Trio was next, in 1975, a complex work with sonorist elements and extended techniques, with the interplay of timbres an important structural device. Two decades later, the composer had abandoned such experimentalism; the Third is a taut, highly contrapuntal work, its harmonies astringent, its textures spare. This tendency continues in the unfinished Fourth; there seems to be a slight shift toward greater consonance and a more genial melodic flow, counterbalanced by greater economy of expression. Quatuor Molinari.