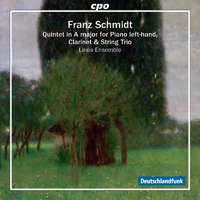 Description: This quintet was the last major work completed by Schmidt prior to his death and is the last of the three quintets written for the pianist Paul von Wittgenstein, who had lost his right arm during World War I. Already a few years earlier Schmidt had composed a more trimly dimensioned work of the same instrumentation for Wittgenstein (Quintet in B flat major). It lasts about an hour and shows an extreme transparency in the piano writing, along with an ensemble employed with special delicacy. The second movement is an extended, poetic piano solo. Since Wittgenstein feared that this movement would not “come across” in a chamber concert, Schmidt composed a second slow movement (for a total of five, all of which are included on this CD). Linos Ensemble.