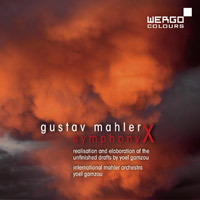 Description: This is the most 'elaborated' completion of Mahler's 10th so far. As in all previous cases, the musical text is all Mahler's, but this version treats what the composer actually left us on paper as less representative of what Mahler's final thoughts might have been than anybody has dared to previously. In a lengthy and well-argued essay, with which some will very likely vigorously disagree, Gamzou lays out his reasoning, and presents his view of what Mahler was aiming for in the piece. Gamzou's view is an apocalyptic, some might say grandiose, vision of the piece, and this is reflected in both his augmentation of Mahler's 'drafts' and his approach to the performance as conductor. His orchestration is elaborately detailed and dense; for the most part it sounds authentically Mahlerian; the most frequently audible sources are the 7th and 9th Symphonies. He also adds counterpoints and changes harmonic emphases voicing and dynamics not infrequently, compared to any previous version. This is a vivid, legitimate and powerful version of the work; musicological purists who are satisfied with Cooke may find it overly speculative; Mahlerian completists and adventurous listeners who enjoyed Barshai's version will find that this further step has much to recommend it. International Mahler Orchestra; Yoel Gamzou.