SUNLEIF RASMUSSEN (b.1961): Symphony No. 2 for Soprano, Baritone, Chorus and Orchestra. 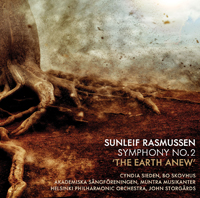 Description: This is an appropriately epic symphony for an epic myth; the Norse legend of Yggdrasil, the world tree. Like all Rasmussen's recent music, the idiom is firmly grounded in tonality, with constant references to Faroese folk music, as melodic inflections, in fragmentary form, or dictating the style and sound of the archaic-sounding vocal lines and choral textures. Rasmussen's music is rugged, rough-hewn, expressive of wild, looming landscapes and epic conflicts. Much is sometimes made of an affinity between aspects of his idiom and the pounding, doom-laden heavy metal rock music favored in the Nordic lands. Those who find this idea in questionable taste have nothing to fear; this is legitimate symphonic music throughout, but a certain driven, heavy percussive persistence is a notable feature of the composer's style, lending an undeniable visceral thrill to the richly textured musical argument. The first movement defines the scale of the landscape and the intensity of the drama, culminating in the creation of the first man and woman; the slow movement is painted in the darkest tones, evoking the booming of waves in deep subterranean caverns - the world in a primal state; a fleet scherzo follows, dancing, mischievous and uncontrollably energetic like the squirrel in the story. The huge, dramatic finale begins by depicting Ragnarok, the end of the world, explosively percussive and brutally warlike. Light is extinguished - graphically so in the waves of obsidian tonality that sweep over the orchestra - and then the world is reborn anew in a sudden transformation into a light-drenched landscape, depicted in increasingly ecstatic floes of tonal harmony and voices raised in celebration. Old Norse-English texts. Cyndia Sieden (soprano), Bo Skovhus (baritone), Academic Male Voice Choir, Helsinki, “Merry Musicians” Male Voice Choir, Helsinki Philharmonic Orchestra; John Storgårds.