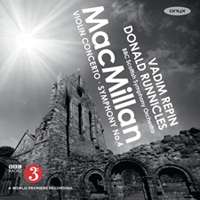 Description: The symphony is a powerful, intensely dramatic work, of epic scope, in a readily accessible neo-romantic idiom that fulfils all the needs of romantic expression but in a modern tonality-based idiom. A great deal happens in this piece, and there is an unmistakable and potent sense of narrative, though the composer denies any programmatic intent. Amongst hints of Shostakovich, Messiaen, tintinnabulary new spirituality and a brief flirtation with post-minimalist propulsiveness, MacMillan weaves extensive quotations from a mass by the sixteenth-century Scottish composer Robert Carver into his complex tapestry of ideas, memorably introduced, and periodically restated, by a vibrato-less consort of solo strings. This link to the sacred and historical is far from unusual in MacMillan's output, and neither is the drama of assault by the corruption of the world on the purity of faith, which seems to be a recurring theme of the symphony, in some stunning passages of conflict between martial battle music and the serene chant-based melodies, the latter increasingly ascendent. The work ends with the graphic collapse into chaos of the forces of opposition, and a triumphant conclusion. The idiom of the concerto is the same, with MacMillan's mastery of wayward tonality that suddenly, dramatically, resolves onto a definite center a recurring feature. So is the incessant recurrence of Scots folk-fiddling and dances into the argument. The piece was actually written as a memorial for the composer's recently deceased mother, and this probably accounts for the conflict between anger and aching melody in the work's first movement. The latter predominates in the tender, increasingly passionate slow movement, with its wistful, folksy memories of childhood, while the finale combines 'dance' (now a grotesque totentanz) and 'song' elements of the first two movements, the Dies irae, a spoken fragment of text which came to the composer in a dream, and a final cathartic climax. Vadim Repin (violin), BBC Scottish Symphony Orchestra; Donald Runnicles.