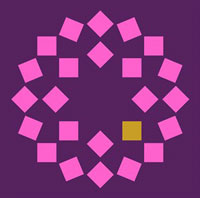 Description: The utterly delicious Concerto for Baroque Violin (2018) is neither neo-baroque nor baroque pastiche; rather, it is a kaleidoscopic mosaic of glittering fragments of baroque styles and allusions (some of them surprisingly familiar-sounding, but gone or transformed into something else so quickly that you'll be hard put to place it in context) in a thoroughly and unmistakably modern composition that is as tonal and enjoyable as its authentic forebears. Having said which, a pitch-perfect (sorry) part of the work's lighthearted charm is the microtonal "re-tuning" in media res, riffing on the evolution of baroque tuning. The piece is more than a humorous bagatelle, however; weighing in at about 20 minutes its two contrasting movements weave a narrative of some emotional depth. After the sparkling energy of the first movement, the second laments in velvety shadows, the harpsichord now assuming an important role in trying to maintain classical gentility in the face of the decay wrought by the inexorable advance of time. The Concerto for Baroque Oboe is more of a conventional 'modern' concerto in a single span, though with the special characteristics of the solo instrument determining its material and style of playing much of the time. The ensemble material frequently has a Bartókian pungency - seldom more dissonant than that - though in some passages, baroque, or even 'light classical' styles are evoked. The composer describes the music as moving in circles within circles, with "an episodic, changing character" rather than being divided into movements, which describes the work's evolving character and moods, sometimes fractured by abrupt discontinuities. The closing section, with an eloquently pleading oboe melody over Mahlerian harmonies in 'consort of viols' style, is particularly telling. The composer describes his 3/4 hour Sinking Through… as "one of the biggest, longest and most demanding of my instrumental works" and it is certainly a tour de force for the violinist and full of challenges for the conductor, though not on account of conventional virtuosic display or density of orchestration. The soloist’s extravagant leaps and acrobatics in the stratosphere and chamber-music co-ordination with the ensemble present the unusual score's principal challenges. Rasmussen suggests that not too much be made of the title, but that the keyword is "sinking", as the predominant direction of the melodic lines is downward. The sense of a reflective, transmutational boundary between dreams and reality is frequently suggested by the character and sonorities of the music, and shimmering, aquatic textures are a persistent feature, as in the episodes of the last movement "Rondo". The first movement, Prelude, establishes the timbres and contours of the work, and leads into the vigorous, virtuosic Scherzo, which is curiously reminiscent of the swirling celestial chimes of Adès' In Seven Days (written ten years later). The slow movement is a "Passacaglia", full of ghostly, glimmering timbres and mysterious chimes, which make up the "ground" over which the soloist spins iridescent skeins of gossamer texture. The "Rondo" finale is just as unconventional a treatment of the form, a kaleidoscope of scampering gestural fragments and insanely rapid twisting threads of sound, the distinction between sections being textural rather than thematic. Concerto Copenhagen; Magnus Fryklund (conductor).