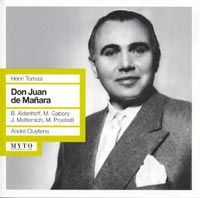 Description: This is based on a real-life figure from the 17th century who renounced a dissolute life via the love of a pure woman who dies, leaving him to become a monk devoted to the poor. A previous issue on Forlane of a 1952 French Radio brodcast conducted by the composer led Alan Blyth in “Gramophone” to say it “deserves to rank with Poulenc's Les Dialogues des Carmelites as one of the most searching and sincere operas of the postwar era.” Here it’s sung in German, performed two months after its premiere, presumably by these same forces (it was written between 1942-44). Good mono sound. 2 CDs. No libretto. Bernd Aldenhoff (tenor), Magda Gabory, Marianne Schech (sopranos), Max Proebstl (bass), Chorus and Orchestra of the Bavarian State Opera; André Cluytens (rec. May 28, 1956).